Sobering for Octobering... SAY WHAT?!

Yes. I have decided to be one of those annoying people that sign up to do something for charity for a month which goes hand in hand with a similarly annoying phrase that just about rhymes with the month... this month in fact.


I have begun to tell you this story in a rather cynical way, as despite my joie de vivre at the beginning of the month for the task in hand, I have generally (with a minority of exceptions) received nothing but laughs and tuts and declarations of utter abomination. 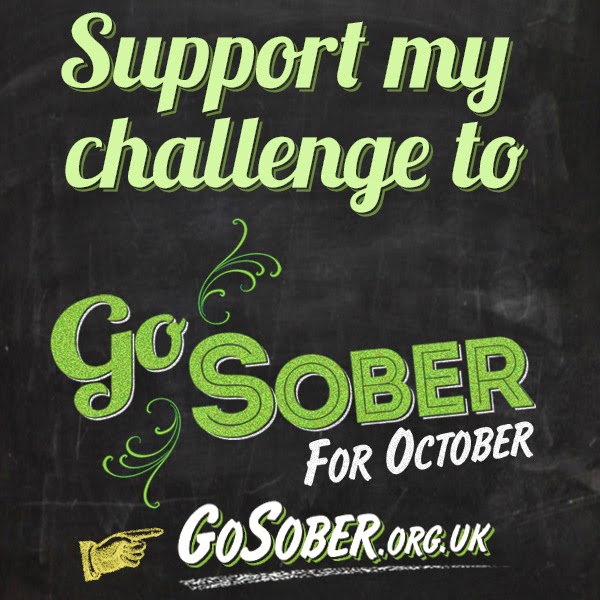 So...I decided to post the following last night on one of those silly social networks that I get addicted to every now and again...

"Well...this is probably pointless as the majority of people I'm mentioning it to scoff and ask why I'm bothering... well... Charity? Detox? Health? Clarity? Peace of mind? It's a lot harder than it seems when you are one of those people who does very much enjoy a tipple or two or three or more. I'm now feeling bored, uninspired and pretty fed up as it's not very motivational when there's not many pats on the back along the way. Bah humbug.

And most people say they'll sponsor me to drink as it seems silly to sponsor me not to... SO!!! You lot...go to my page and click to DONATE A GOLDEN TICKET on the right hand side of the page and I will happily drink for you all.

Going to down my sorrows in a mug of rooibosch.

I will say no more on the matter. I'm bored now."

So then... depending where you stand on this one and if you decide to brush it off with the rest of them (HUGE thanks to the three people that have donated so far and a couple of good friends that have said nice things) I would very very very much appreciate any donations. All donations go straight to Macmillan Cancer Support for basically giving up booze for the whole month, which isn't as easy as it sounds. When the three donations I have received came in, it did inspire me to stay on target and keep going to raise money for Cancer Support.

I know it is only the fourth day into October but we do tend to share a bottle of wine midweek with each other or have a midweek drinky-poos around the dinner table with friends and really enjoy it. Then when the weekend comes and the kids are tucked up I want nothing more than to put my feet up and have a nice glass of wine...or four. It also makes going out to social gatherings, or having friends over for a drink at the weekend extremely challenging but won't stop me being social and still attending.

So, to me this is quite a personal challenge indeed. It hit me even harder last night when researching all the other fellow go sober do-gooders when looking at their totals that they've been sponsored, already in their hundreds and some reaching, and already into the thousands. I feel like I've been abandoned to sit in the corner with my dunce's hat while people point and laugh at the boring sober person.

So there you have it...if you'd like to raise your glass to me and donate whatever you like... 50p? A squid? Two, three, four? Fifty? One hundred? I would be eternally grateful. Click HERE.

OR...if you're feeling like I could do with a break and let my hair down you can also DONATE A GOLDEN TICKET to allow me to have one night off. At first I thought this was a terrible cop out, but then I thought again and I very much welcome the idea as it is still raising money for charity and maybe I will stop feeling quite as frustrated as I do right now and stop wanting to eat everything in sight?!!

Wish me luck!
Posted by Miss Moopette at 4:54 PM

I've a few people I know doing this and though money is tight shall see if I can put some your way. Macmillan Cancer support is an excellent cause.