Hello to you all.

I'm over again at the Garg blog -> Ergo Phizmiz: "Gargantua" -: It's the end...: ...of the Wolf mask template! Over the course of the last few days the part I repaired crumbled leaving the mask in three quarters as seen...

If you've been following my progress on the Gargantua blog you will see that my progress has been a tad slow. However, things are finally coming together and I'm feeling a lot more confident about my part in the whole thing.

The end of last year was very exhausting with a list as long as my arm that needed completing as well as taking on a temporary Christmas job in a clothes shop to help towards Christmas as well as my usual part time job in a gift shop. I barely felt that I had a minute to myself, let alone a minute to concentrate on making new things that I wasn't wholly feeling so confident about. In fact the whole episode ended with an awful flare up of a horrendous chronic stomach condition I have that shows it's ugly head every few years (especially at stressy times). So now I'm even more geared up and raring to go after my body's got over attacking itself. So to take the bull by it's horns as you may say. Get better and make, make, make.

I've got plans to do more arts/crafts/vintage stalls, so I've got lots of making to do. I've got promises of films for different people that I didn't have the time to do last year. I've got lots of ideas for new films and experiments with films I'd like to try out. Photography ideas. Ideas and plans for ceramics and my poor Potter's wheel that I've not had time to use. And finally get the mug transfers I made, done for Isle of Tea and also sort out the shop and get it re-opened again. Also though, I think it's time to reign in offering all my talents to people for free or very little. It seemed like the whole of last year I pretty much dedicated all my spare time to helping other people out with their projects/ideas/work, etc.


It may seem selfish to say that, but it is meant with the best intentions and to myself too. I've spent far too long, diverting my attention with other things and not feeling good enough about what I can achieve. I often refrain from spilling the beans on here, but I'm as human as everyone else and generally in everyday conversation, it is the people I can completely be myself with that I get along with the most and they've seen an awful lot of my beans.

And just for fun, I think I'll share with you an image from when I must've been around 30 months...and upside down, in my pants. 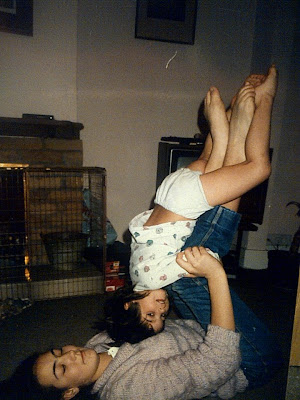 This evening we're planning to watch an Orson Welles film and tuck into the Veggie Goulash with Horseradish dumplings. I should really get these kiddies to bed too, get my comfies on and get my new hot water bottle at the ready.