How do, all? I've been meaning to get this post up for a while now, but as usual with the many million things on my lists, it's not been happening.

So here I am. How've you all been? Any fabulous news you want to share with me? Makes? Bakes? Crafts?

Just wondering as I'd love a good ol' catch up. Been a bit blind recently with all the other things going on!

Here's a little update as to where to masks are at... click here to see where they were up to last time I posted about them... 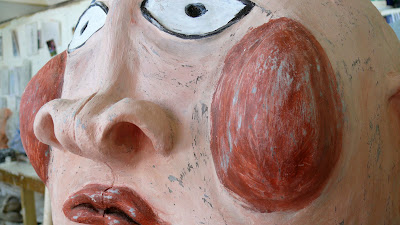 The mask at this point is still not finished, as you'll see by the next photo. We wanted to try it on to see how well it fit. We will be padding out the bottom of it as it is a little painful on the shoulders. It is actually so much lighter than it looks as well. And we'll be putting eyeholes in it somewhere at some point too!

The next stage was painting over the whole thing with shellac to age it and also make it look more wooden and like an old toy. We were greatly inspired by punch and judy puppets and also Jan Svankmajer whose work we love.

At first we were worried that it was too brown but this is because we couldn't get out of our minds how the first painted one looked. Out of context and left in the studio for a week or so, the colours seem to have faded slightly and it looks great. Apparently when people have been popping into see Mike in his workshop (where we've been making the mask) people genuinely were thinking it was a very old toy/mask/thing. 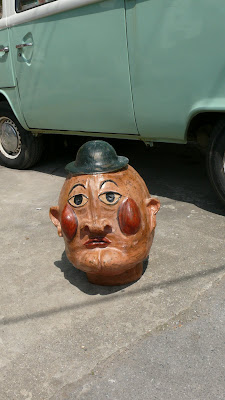 He is now currently sat in our front room window looking at passers by. I would take a photo but our SD card has just recently broken and won't let us use it anymore. Sure we'll have a new one soon!

Next up is giving this policeman a ginger moustache and eyebrows, padding out the inside and the neck of the mask and then painting the new mask up (for the 2nd policeman).

Tomorrow we'll be making a mould or two of bananas to make his moustache.

So there you have it!
Posted by Miss Moopette at 6:33 PM

Email ThisBlogThis!Share to TwitterShare to FacebookShare to Pinterest
Labels: the third policeman

Oh my! That mask is all kinds of ace. You are really talented lady!!!

He's fabulous! I was a bit worried about how brown he looked, but as you say he seems to have faded since, and you need him "coloured up" to counteract stagelight bleaching I s'pose. He does look like an old piece - he's definitely mr punch's big cousin. Prop-making now part of your business repertoire I hope!
Looking forward to seeing the next ones you make x