I remember when I was four or five and started Primary School in Scotland when my parents split and we moved to stay with my Grandparents for a bit. I can't even remember the name of the place or School but I particularly remember singing a song with my two friends in the playground.

I remember a game, which I think consisted of us standing in a row and singing, "Busy busy bumblebee", which we had all seen from an advert on TV. It was some kind of kid's board game advert or something.

I've been stupidly busy again recently. I've had video and photography projects on the go simultaneously as well as setting up accounts for local businesses. Also working with Ergo Phizmiz on his new piece Gargantua, I have recently set up the Red Brick twitter account and also now run the Red Brick Cafe facebook account (with other members). And my part time job in the gift shop I work in and my ever so new Christmas temp job...and new music videos I'm making too. A tad flustered and losing my mind but I can't say I'm bored.

A couple of weeks a ago I was asked to take some photographs or St Michael's trading estate for a website about Enterprise St Michael's. This is the same St Michael's I talked about in a post a while back and is where the Red Brick Cafe, I work at, is situated. 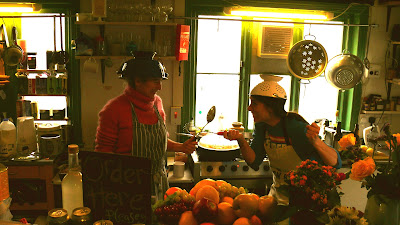 Anyhow... I wanted to share the photographs I recently took in the Cafe. So there you are.

I particularly enjoyed taking photos of my friends who run the Cafe. They're great (and you can see them pictured above having a duel).

The only other thing I remember from that School is telling I boy that I quite liked the look of (even at four/five!) this elaborate story that me and my family, before I'd moved to Scotland from Sussex with my dad and brother, that we'd (as a family - my mother too) managed to escape the house from some unfathomable thing, through a second floor window, onto a ledge and down a vine to escape some vicious monstrosity going on and into our massive garden with a stream running through it.


I still remember that memory as if it was real. The stream and massive garden were, but I dare say the rest wasn't.

Well, kids to put to bed, new music videos to film and edit this evening and a mind to scoop off the ground and shovel into bed at some point.

Good night one and all.
Posted by Miss Moopette at 7:04 PM

YOu do always seem so very busy! Glad to get to catch up with your posts though! :)