Found that WI cook books from the 70s seem to be some of the best books with foul photos of food. They're fabulous for them! Plates upon plates of sickening, nauseating looking food.

To me, this meal looks a bit like play dough made food and the parts in the middle look like half chewed up food that's been spat out again.

On another note... today, seven years ago, about two hours ago precisely I was marrying the fellow I'd been with for three years, with a little un on the way. 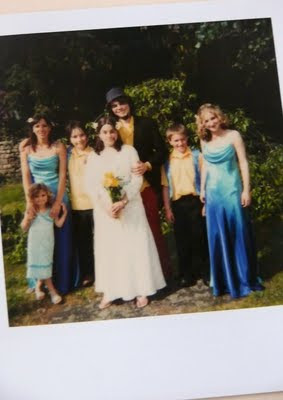 Looking back, I wish I had gone along with that dress that I'd eyed up. An off the shoulder with ruffled breast panel, with beautiful flowing full skirt which I would have most likely worn with some black dms, but didn't then, at 19 have as many balls as I've developed now. Alas, I went with this long linen white skirt and a linen, white and blue top to cover my 6 month bump.
Unfortunately too, this seems to be the one and only okish photo. Being six months pregnant and a tad on the overweight side anyway, at the time, I wouldn't say I was a so very photogenic bride. And colour scheme... well... yeah, I find it all really cringey now. I had wanted the bridesmaids to wear more natural fibres too, but left it to them what to wear, but was thinking on the greeny blue kind of side to go with the stitching on my own top. I think someone suggested the Mr wore a yellow top, so the little fellows did too... but now, looking back, I think the pics make me feel a little...sick.

It's a shame the photos don't really capture how the day was, as it was an amazing and marvellous day. I walked down the aisle to the OH playing his accordion with a tune he had composed, which nearly had me in floods of happy tears. We said our own vows and had my new brother in-law reading some poems he'd made up of us and play the violin. We asked people to take photos throughout the day (we didn't want an extremely extravagant full blown wedding), all 100 of the people took a bite of French toast to toast us, we had a cake made from yum yums, we made our own little play list of music and had a little boogie, had silly polaroids of us stuck all over the walls and had a giant bunny walking around the whole day. It was all very laid back, fun, silly and heart warming. 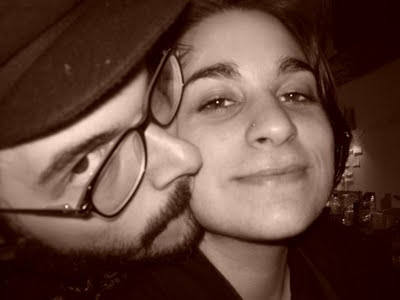 So there you have it.

And then these two littles followed... 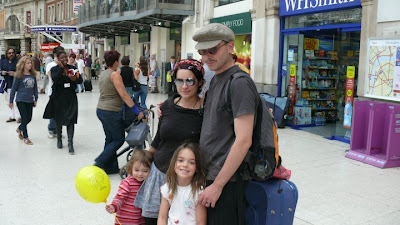 Posted by Miss Moopette at 6:01 PM

Aaaw happy anniversary to you and Mr Moopette. I know what you mean, I think taste pretty much left me behind at my wedding- I wish I'd read all the stylish thrifty blogs that I've read now, and I would have had more inspiration for the cheap and chearful wedding we had nearly 10 years ago xx

Congratulations - by 'eck, you were practically a child bride! So sweet that you've been together 10 years now. Love the idea of the polaroids being stuck up around you on the day - and that you made the day so personal to you both x

Congratulations and belated happy anniversary! This is really lovely.

When you see how many good (ameteur) food pics there are on the net now, it's crazy how bad food looks in proper 80s cookbooks!

Belated Happy anniversary my lovely! You are clearly each others' lobsters :)

Thanks for all your very lovely messages!! :~}