A Spring In Our Steps...

Hurrah!! Well, it seems to me that Spring has pretty much arrived. And isn't it a pretty one too! It's been really beautiful the past week and I hope it's here to stay. (Actually... I know for a fact that it has arrived as so has my annual hayfever which seems to nicely last all Spring and Summer!)
We had a walk down to the beach yesterday with the leftover bunch of artists/performers (that have been staying with us, after performing at our event HowToSayTo at the local Arts Centre). Which went magnificently well too! Lots of very good feedback, so we're hoping to do another one in a couple of months again.
On the way we found a snowy white blossom tree, that was stunning against the sky. 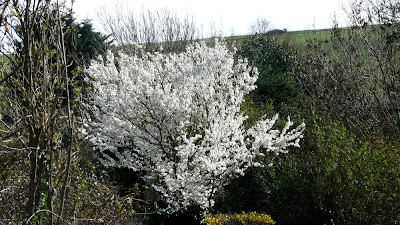 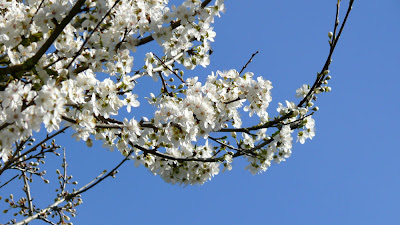 It was one of those perfect days, where the sun was shining and warming your innards, you're with very good company and everyone has a smile on their face. We even had a bag of chips and icecreams all round then a little drinky in a seaside pub. Although some of us started to flag as we'd had a very exciting get together (after the show the night before) which, for some of us went on until 8.30am that Sunday morning. I would say I was a tad sensible with 4am. Just a tad mind... But all was well as I'd filled everyone up with masses of veggie chilli that lasted the whole night before (to feed 15 people) and then another 9 the next day! I was pretty impressed to make such a vast amount, as I always find when cooking for people you tend to make either waaaay too much or too little. This was perfect though, because as mentioned, some people were a bit worse for wear and another big bowl of chilli seemed to sort them right out and there was enough to go around, but thankfully all be used up!

We had some good finds that day on the beach too. Mostly by Talulah, who'd found the most amazing fossil I've ever seen found whilst you're on the beach. Suppose we do live on the Jurassic Coast after all. There seemed to be hundreds of cuttlefish bones around too.

Being at the beach felt quite strange however, with the juxtaposition so brutally evident with what's going on in Japan right now. Couldn't help but feel quite hollow and pensive whilst watching the waves calmly creeping back and forth along the shore. Visit this website which gives "Seven Simple Ways to Help" towards Japan's Earthquake & Tsunami crisis.


It would be an eversobrilliantandwonderfulBOOST if you there, dear reader, were my very first customer at LittleBittyPrettyOne (Folksy) & LittleBittyPrettyOne (Etsy). I'll be stocking them up even more after next week (when I'll be going a little bit cuckoo without any internet/laptop/tv at all to keep me occupied), so thought I may as well use the time to make make make!


I have finally managed to get the second sidebar on my blog, that I was ever so determined I would make happen! Only ended up being that stupid firefox didn't want to let anything work in blogger but internet explorer did. Only now... the niggling thing is the stupid not centred header photo, which I presume one night I will be editing until silly o'clock in the morning one night, and you can watch a wonderful dancing photo header for hours, whilst I perfect it. Perfectionist? Me?? Eh?


I've decided to leave you with a funny little video about Owls. Goodnight to you all. Bath time!

Such pretty pictures- I've never been so excited about Spring arriving ever! x

Those photos brought a smile to my face. The blossom, the fossil, the blue sky. Seems like a wonderful weekend was had!